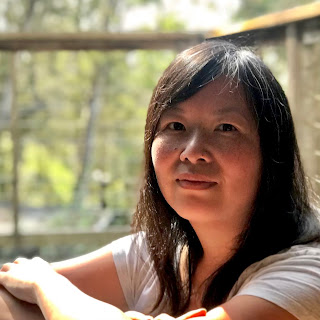 Mượn Thị Văn loves to read books of all shapes and sizes. The first language she learned to speak in was Vietnamese but the first language she learned to read in was English (and she was so shy in elementary school that she practically learned to read English before she spoke it). The first book she remembers reading on her own was a yellow Nancy Drew hardback from the school library, and because the library had the whole series, it was a while before she read anything else.

Funnily enough, Mượn doesn’t remember remember reading picture books as a young child and instead discovered them in high school. In picture books, she found a wonderful meeting of art, poetry, philosophy, and humor. So few books reflected her formative experiences, though, that she desired to bring new and different stories into the world.

Now from her home in northern California, Mượn crafts stories after drop-off and before pick-up. Some of these stories become books, and some of these books are read around the world. From her acclaimed debut, In a Village by the Sea, with April Chu, to her latest, I Love You Because I Love You, with Jessica Love, Mượn’s books have received many distinctions, including a Margaret Wise Brown Prize, a California Book Award, and an Irma Black Honor Award. Her recent book Wishes, with Victo Ngai, was named the Best Picture Book of 2021 by BookPage.